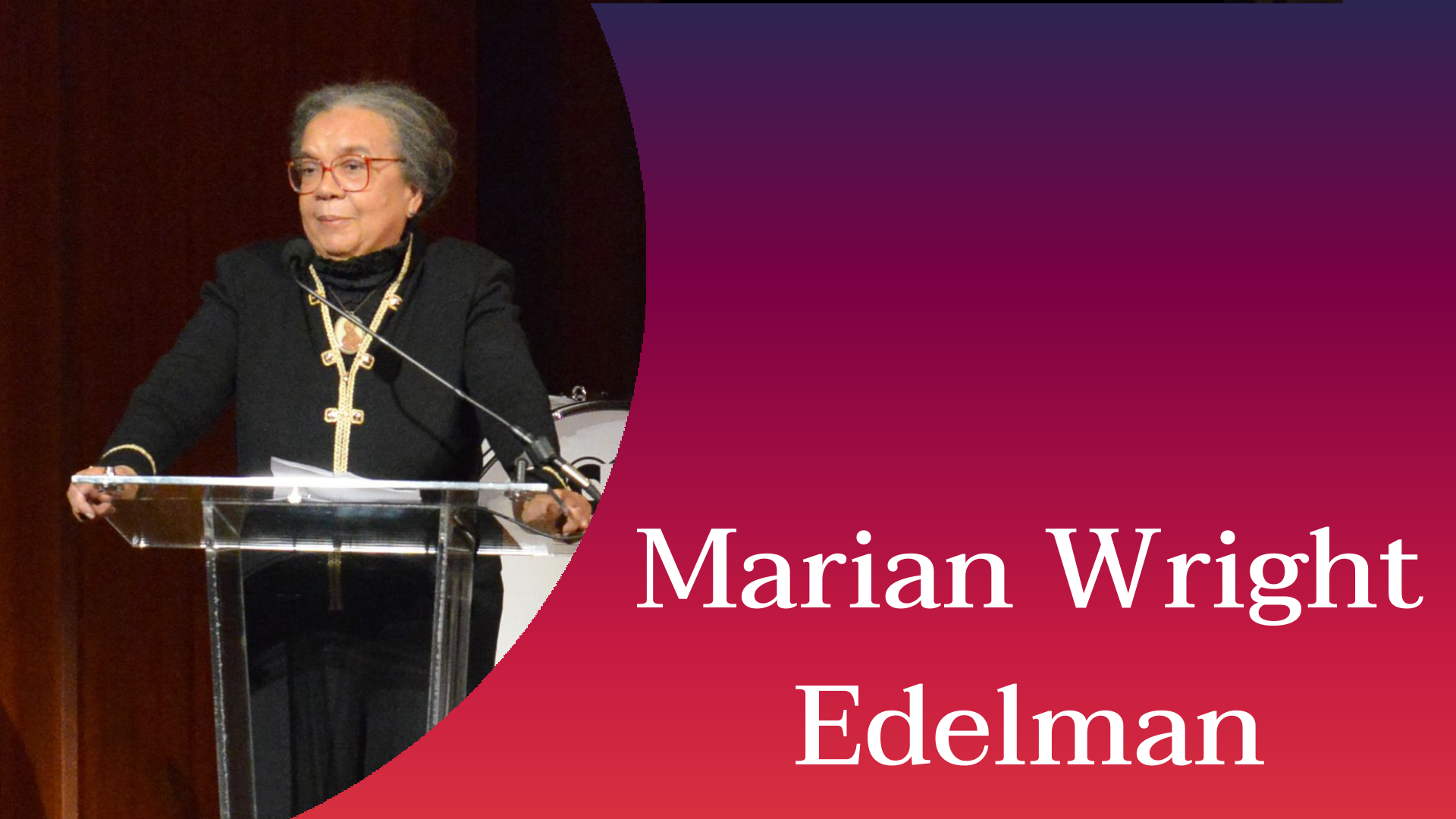 I know many great people, but I’ve been especially inspired by those who had deep enough a faith in mankind to believe that the world can change. The people who somehow know and feel at work so that wherever there is injustice, they don’t talk about it — they do something. Where there is suffering, they do something, they act. Martin Luther King Jr. was such a person, and so too is my other friend, who I’m honored to introduce tonight, Marian Wright Edelman.

Growing up in South Carolina, Marian Wright was in a family where her parents made sure that she understood that one thing was clear: that she would get as much education and as good an education as she could get. And once she had the education, she would use it in service. And that has been a part of her life all of her life. She went to Spelman College and then from Spelman, she received a law degree at Yale. And when she received that law degree, I met her because she was just finishing law school and she came to Mississippi at the height of the civil rights movement to be of service, and of service she was.

She married another civil rights lawyer, Peter Edelman, and then they moved to Washington where Marian Wright Edelman became the counsel for Dr. King’s Poor People’s Campaign. Many people talk about Dr. King’s speech at the March on Washington. We need to read his speech and see what he said about the Poor People’s Campaign, because [Hurricane] Katrina has laid bare for us the poverty that’s in our country if we didn’t know it before. In 1973, Marian Wright Edelman began by founding the Children’s Defense Fund. It was an opportunity that had been there for a long time, but it was Marian who said children should have a safer place to grow up, should have those things that they need for their lives. They need a head-start, but they need a healthy start. And their parents need help in order to provide that, and the whole community needs to look at itself to see what we can do to better our community. The Children’s Defense Fund has really changed many minds so that we care not just about our own children, but about all children.

Marian Wright Edelman has been in the forefront helping us in our country understand the values and importance of really working for children. Children do not vote, but we have to vote for them. In looking back over it, I would say I wouldn’t take the time to tell you all the honors and all the degrees that Marian Wright Edelman has. She has so many, but she always says the thing she is most concerned about, and gets the most reward from, is from service. She says, and she’s many times quoted, that service is the price you pay, the rent that you pay for your time of living on the planet earth. And we all remember that. And so tonight it is a real honor and a pleasure for me, on behalf of the Washington Choral Arts Society, to present the Humanitarian Award to a distinguished woman, to a great speaker, to a visionary leader, to a great American and a caring American. If ever there was anyone who cared about what happened to children, it’s Marian Wright Edelman. And to present this Humanitarian Award honors me to present it to the distinguished woman I’ve mentioned, my friend Marian Wright Edelman.

I am so honored by this honor, and to follow anywhere in the footsteps of Dr. Dorothy Irene Height, who’s been my great mentor. And I want to thank Maxine Baker from the Freddie Mac Foundation, who personifies caring and strategic corporate philanthropy. Thank you, Maxine, for your leadership.

I first met and heard Dr. King on April 10th, 1960 at Spelman in Spelman College’s Sisters Chapel. And three of his lessons branded themselves in my mind and in my heart. He talked about the importance of faith, about having the courage to take the first step. Even if you couldn’t see the whole stairway, we were still obligated to take that step for justice and righteousness and leave the results to God. We need to get that faith back today. The second lesson I remember was about his call for action and the need for movement. He said, “Don’t ever stop moving.” If you can’t fly, drive. If you can’t drive, run. If you can’t run, walk. And if you can’t walk, crawl, but keep moving. And it’s time, folks, for us to build a movement to end shameful child poverty in America.

And the third lesson he taught the Spelman girls that morning, which he tried to teach our country, was the importance of love, a big love that could encompass everybody, including our enemies, which is why he called for nonviolent action. And he really said that if we love all people as God’s children and all children as God’s children, that we could transform the world. And he set about trying to do that.

And on this wonderful honor of an occasion, I hope that we will commit to finishing Dr. King’s dream. More of us would rather celebrate him than follow him. He’s not coming back. We’re it. And we’ve got to get about the business of finishing the job he began.

So, I want to end with a prayer by my friend Ana Hughes, because our big problem in this rich nation is that we make a distinction between our children and other people’s children. All children belong to God. Every child is sacred. Every child deserves the American dream as a reality.

And so I hope we will think about what we will do to build that movement for children and to answer the call of our children. And to commit this evening to praying and accepting responsibility for children who sneak popsicles before supper, erase holes in math workbooks and can never find their shoes. But I hope we will also pray and accept responsibility and stand up for children who can’t bound down the streets in a new pair of sneakers, who were born in places we wouldn’t be caught dead, who never go to the circus, who live in an X-rated world. Let’s commit to praying and standing for children who bring us sticky kisses and hug us in a hurry and, against their luck, forget their lunch money. But let’s also pray and stand up for children who never get dessert, who don’t have any rooms to clean up, whose pictures aren’t on anybody’s dresser, and whose monsters are real. Let’s honor Dr. King by praying and accepting responsibility for children who spend all of their allowance before Tuesday, throw tantrums in the grocery store and pick at their food, who love ghost stories, shove dirty clothes under the bed and never run out the tub. Who get visits from the tooth fairy, who don’t like to be kissed in front of the car pool, who squirm at church or temple and mosque and scream on the phone. Whose tears we sometimes laugh at, and whose smiles can make us pray. But let’s also pray and accept responsibility and honor Dr. King by accepting responsibility for those children whose nightmares come in the daytime, who will eat anything, who’ve never seen a dentist or a doctor, who aren’t spoiled by anybody, who go to bed hungry in this rich land and cry themselves to sleep.