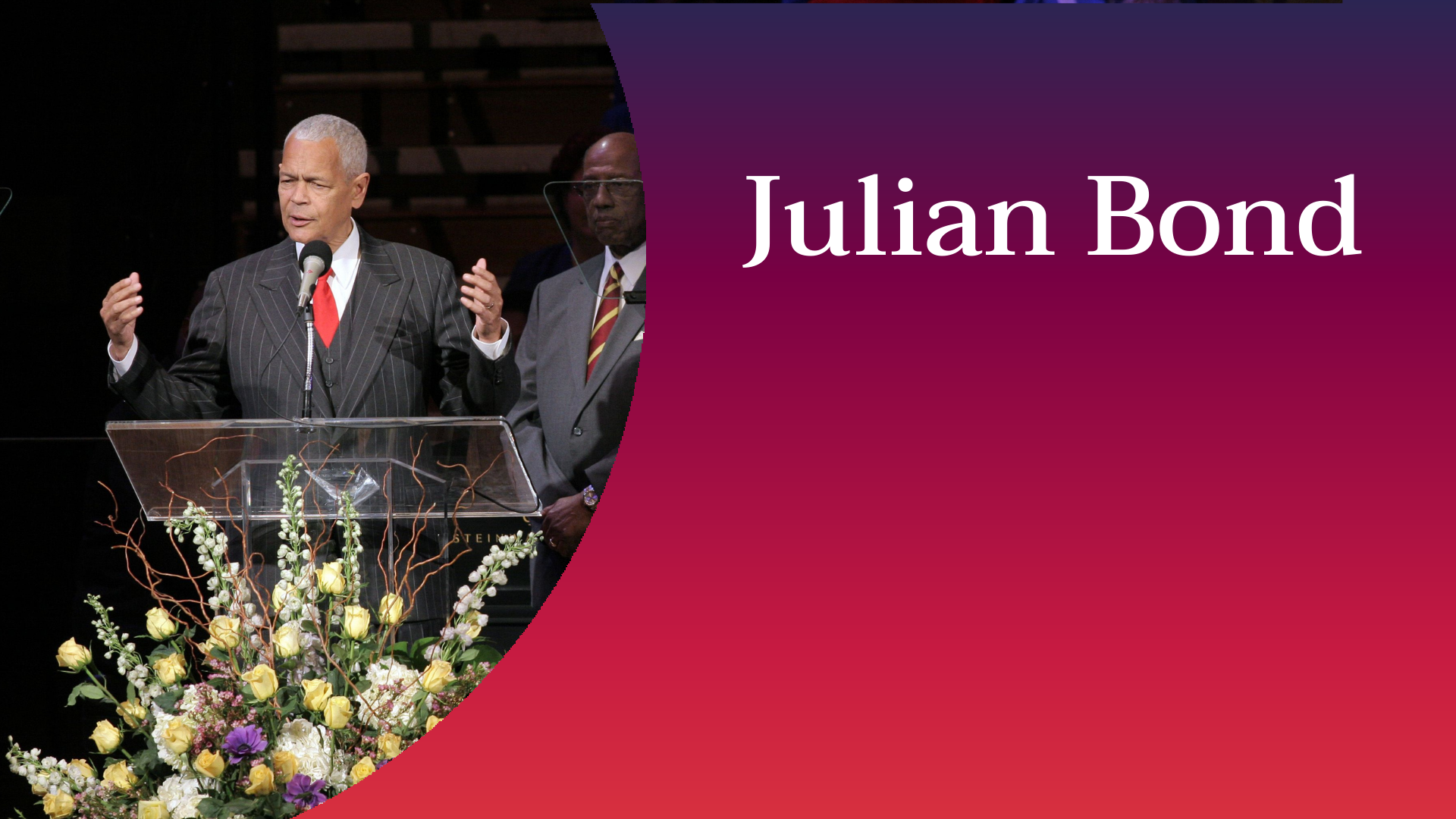 Good evening, ladies and gentlemen. In 1960, Julian Bond was a junior at Dr. King’s alma mater, Morehouse College in Atlanta, when students held the first lunch counter sit-ins in North Carolina and Tennessee. Within days, he was organizing a similar campaign for Atlanta. On March 15th, he led a group of students into the segregated cafeterias of Atlanta City Hall and was promptly arrested. Julian Bond was 20 years old then, and his civil rights career had just begun.

That spring he became a founding member of the Student Non-Violent Coordinating Committee and began organizing voter drives throughout Georgia and the deep South. The following semester he was enrolled in the only college course that Dr. King ever taught, a senior seminar on philosophy at Morehouse. But, as Bond would later write, he became a true student of Dr. King in a larger sense by choosing to become an activist on behalf of the poor and the disenfranchised. If one person is denied the vote, that’s a tragedy, he has said. If one is turned away for a phony reason, that’s a little chink in our democracy. He continues to this day to fight for a free society, challenging in particular improper or illegal election practices through his position as chairman of the Board of the NAACP and through his roles of author, film and broadcast commentator, public speaker, and professor. Few among us are given the opportunity not only to teach history, but to help shape it. Like Martin Luther King himself, Julian Bond refuses to stand on the sidelines of life.

Ladies and gentlemen, it is a great honor for me to introduce Mr. Julian Bond. Julian Bond, tonight, the Choral Arts Society of Washington recognizes your lifelong work on behalf of justice in all its forms – voter rights, economic rights, educational rights, all civil rights. You are an extraordinary American citizen, and we all salute you.

Thank you a great, great deal for this honor. And it is an honor indeed. It is accepted, not for myself, but for the literally hundreds of thousands of people who helped to make the civil rights movement what it was. Most of them anonymous, most of them nameless, most of them people who don’t get awards, who don’t appear on TV and who were never known except to their friends and their neighbors and their families. As you’ve heard in the generous introduction, I was a student of Dr. King’s, one of the real students, not one of these people who says, “I was a student.” I was a real student of Dr. King’s. In fact, there were only six people in this class at Morehouse College, the only class he ever taught, so I’m one of six people in the universe who can honestly say that he was a real student of Dr. King’s. I’m a little embarrassed to say that I seldom took a note and I remember almost nothing that happened in the class, but I do remember one day class was over. He and I were walking across the beautiful, beautiful Morehouse College campus and I said to him, “Doc” – his friends called him Doc – I said, “Doc, how are you doing?”

He said, “Julian, I’m not feeling well.” He said, “Unemployment is high. Segregation seems immoveable. Racism is everywhere. I have a nightmare.”

Thank you all very much.